skip to main | skip to sidebar

Don't spook until you're spooken to 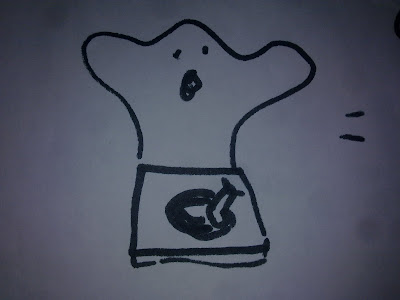 Wooooooooh.... That's a spooky ghost noise, cos it's Hallowe'en, you see. I'm not really a spooky ghost though. I'm a man who does music, sometimes, and has a lot of unfinished business. By "business", I mean "songs", and by "songs" I mean "fannying about with computers, sequencers, guitars and four-track tape recorders making rudimentary dance music and indie fringe-flopping, sometimes at once".

Here are some truths:

I'm quite fond of some of these things. There are some quite good bits.

I'm never actually going to do anything with them now. That includes finishing them.

The internet encourages vanity publishing by its very existence.

And so here we are (are you still here? gosh). I'm going to put a tune or two from my dusty cassette and mini-disc bag up here every week so that someone somewhere can hear them and think "that'll be good when it's finished". They will be mostly dancey (ie not guitary) until I run out of those ones, and if you've come this far you will probably not mind some of it in the background.

Enough self deprecation. Turn it up and it sounds good anyway. Here's the first pair.

A fairly straightforward techno exercise – four on the floor, a bit of 909 clappy action, a very cheap string synth patch slapped on top, with a bit of crackle to jazz it up. I call it techno, because I’m from the nineties when all dance music was called techno (except house, but by then house meant limp rubbish – techno was anything else with a drum machine on) – it probably falls into some sort of mysterious sub-category now that I’ll never hear of or understand. This was not made in the nineties, anyway , but some point in the last five years. It’s probably very fashionable now, actually. Anyway, pump it up and get the twirly patterns going on your monitor. Hey presto – your own four-minute private rave. Drugs may help.


Short, sparse guitar snippet, suitable for the closing credits of a poignant documentary about a tree or some boatmakers. Just simple lines, intertwining. A typical case of fiddling around, finding a little idea, slapping it down and putting it away for a rainy day. My wife, Mrs Olympics, thinks it sounds weird. Perhaps she can’t hear the orchestra that starts up halfway through. What do you mean you can’t either?

No-one understands me. I might call it that, actually.


So,there you go. Hope you enjoyed all that. More of this cathartic rambling next week. Come back!